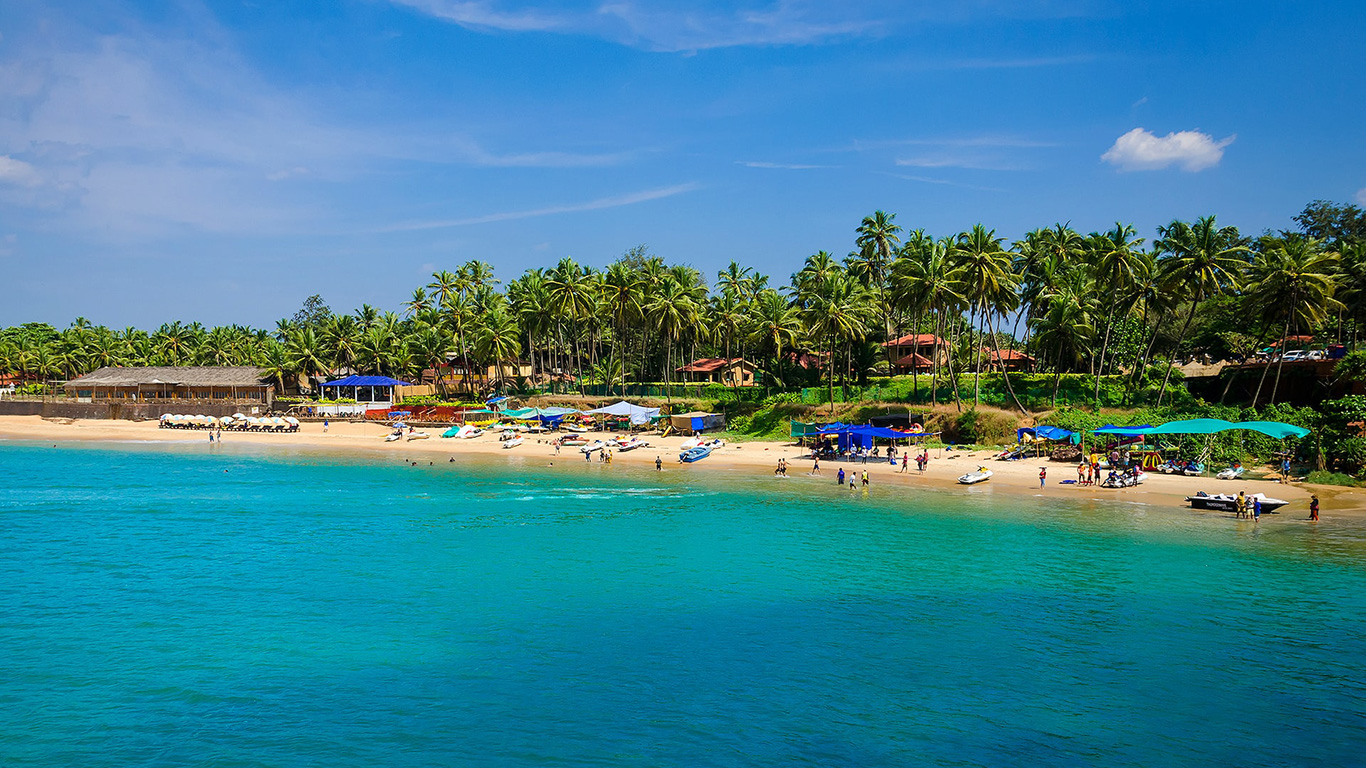 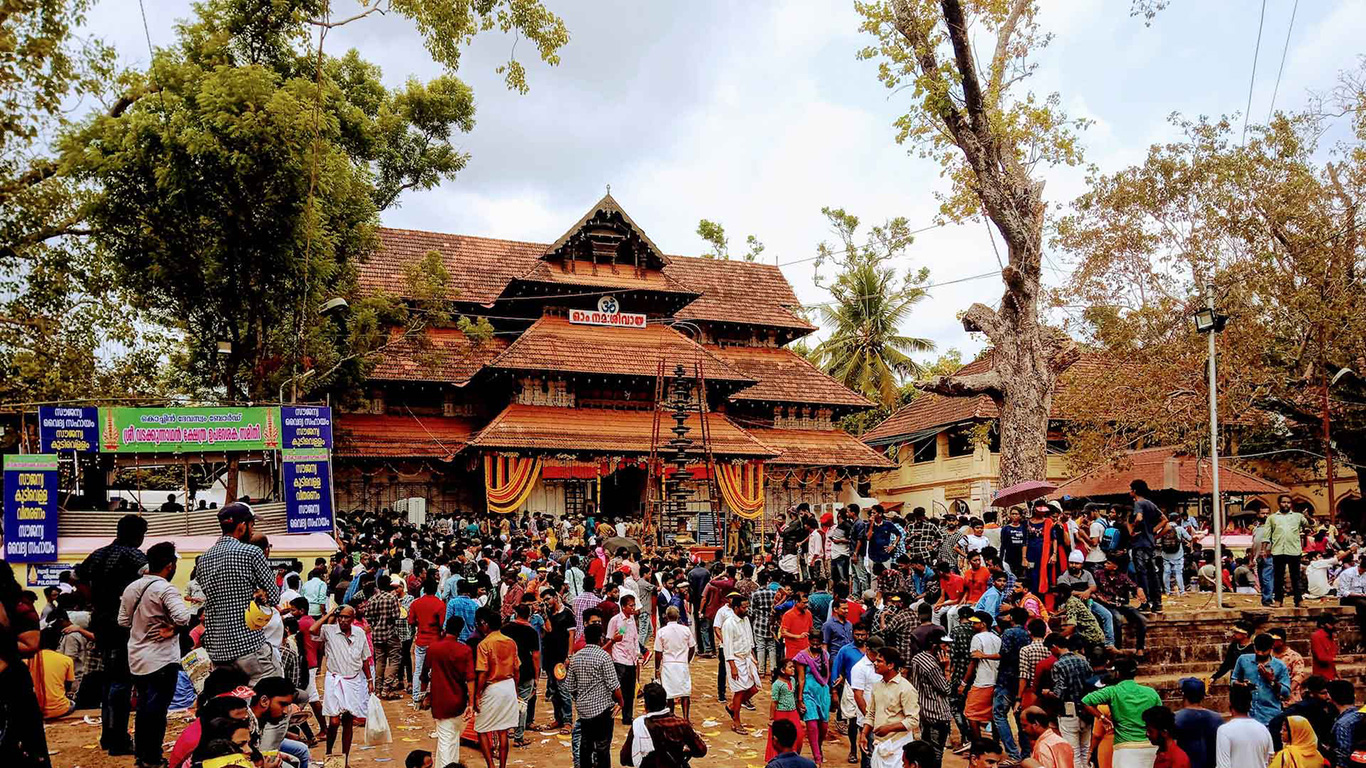 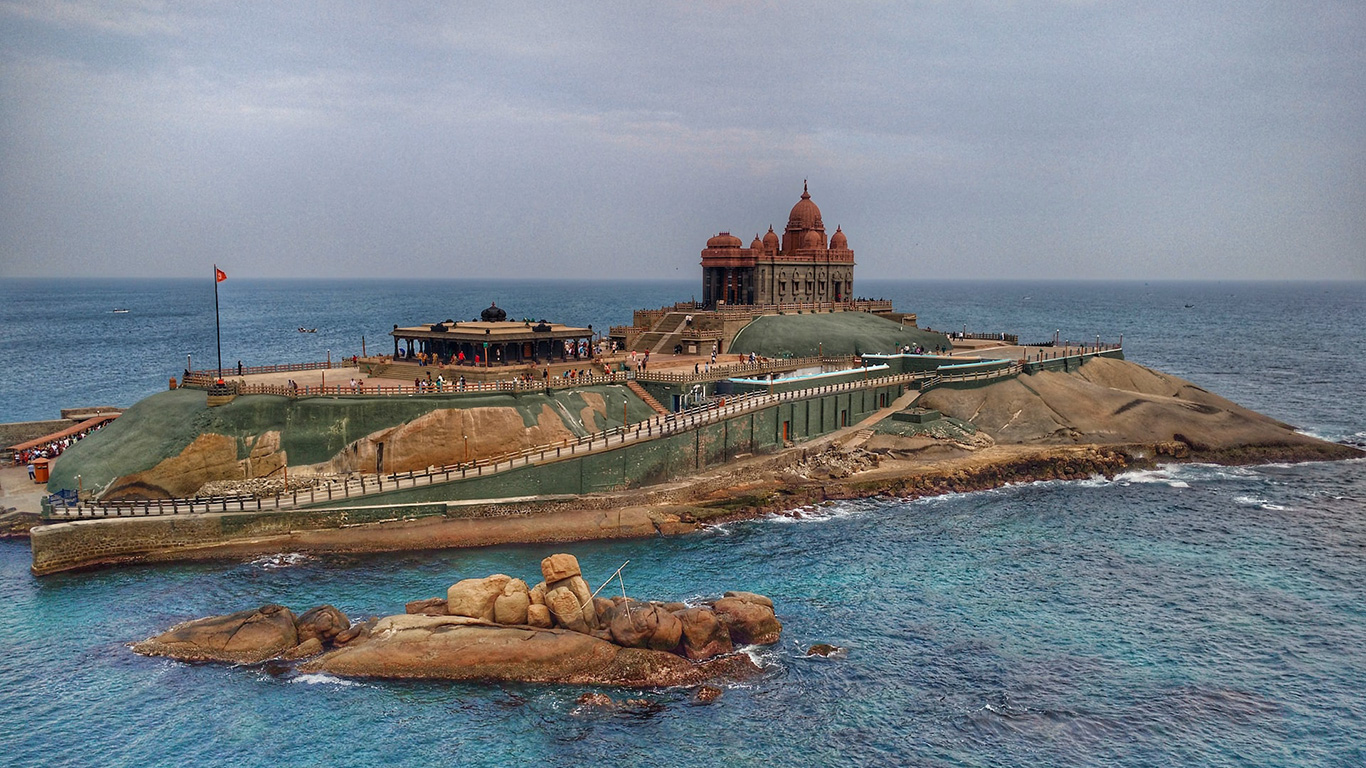 This is our newest itinerary to South India will feature a plethora of photo opportunities including a martial art performance and Theyyam dance show in Calicut, Mohaniyattam dancing and a Panchavathyam Welcome at Kovalam, Duriyodhanavadham Kathakali at Trichur, a Bharatinatyam dance show in Chennai, exploring the famous Kerala Backwaters from Alleppey to Kumarakom with an overnight in luxury house boats, historic Cochin and its Spice Market, and the beaches of Goa. Plus see below for the special photo op spectacle of a private Trichur Pooram Festival Panchavathyam.

Upon arrival at Mumbai international airport met & greet by our staff, and transferred to the hotel for the first of two nights. Hotel at Mumbai. 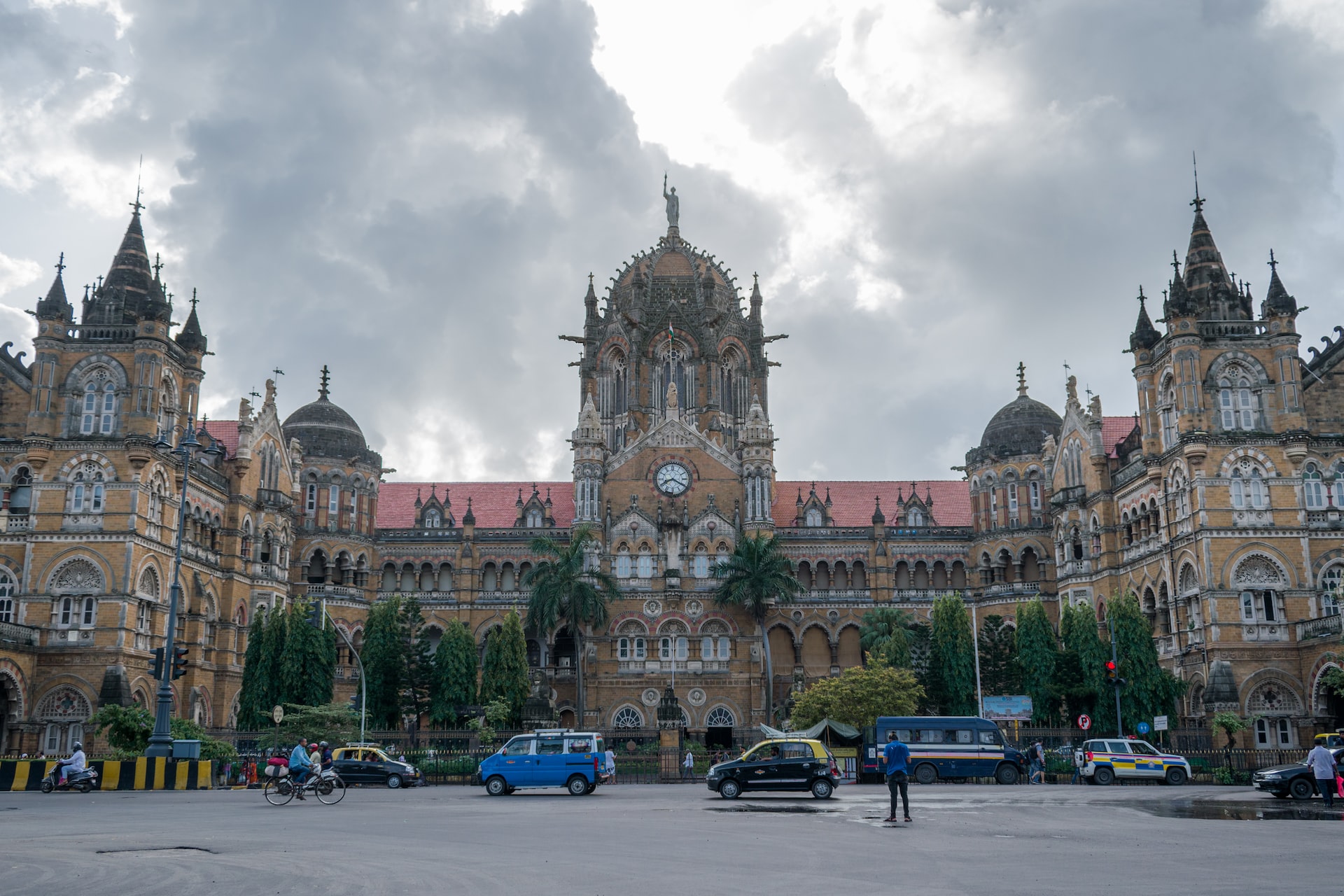 Breakfast & Dinner After breakfast transfer to the Gateway of India to board a motor launch for cruise to Elephanta Caves. The rock-cut Hindu temples at Elephanta, an island 6 miles across the harbor provide exciting glimpses of Indian sculpture dating from 600 AD. Huge panels depict episodes relating to Lord Shiva, the central one being the most imposing one, a five meter bust of the god, represents his three aspects as creator, preserver and destroyer. Upon returning to Mumbai, the Flora Fountain, Victoria Terminus, St. Thomas Cathedral, Crawford Market, Malabar Hill and the Hanging Gardens, and Dhobi Ghat (Washerman's village) are some additional attractions to be photographed as time permits during the afternoon. A stop at the Central Railway Station at peak hours is another interesting spot for photographing. 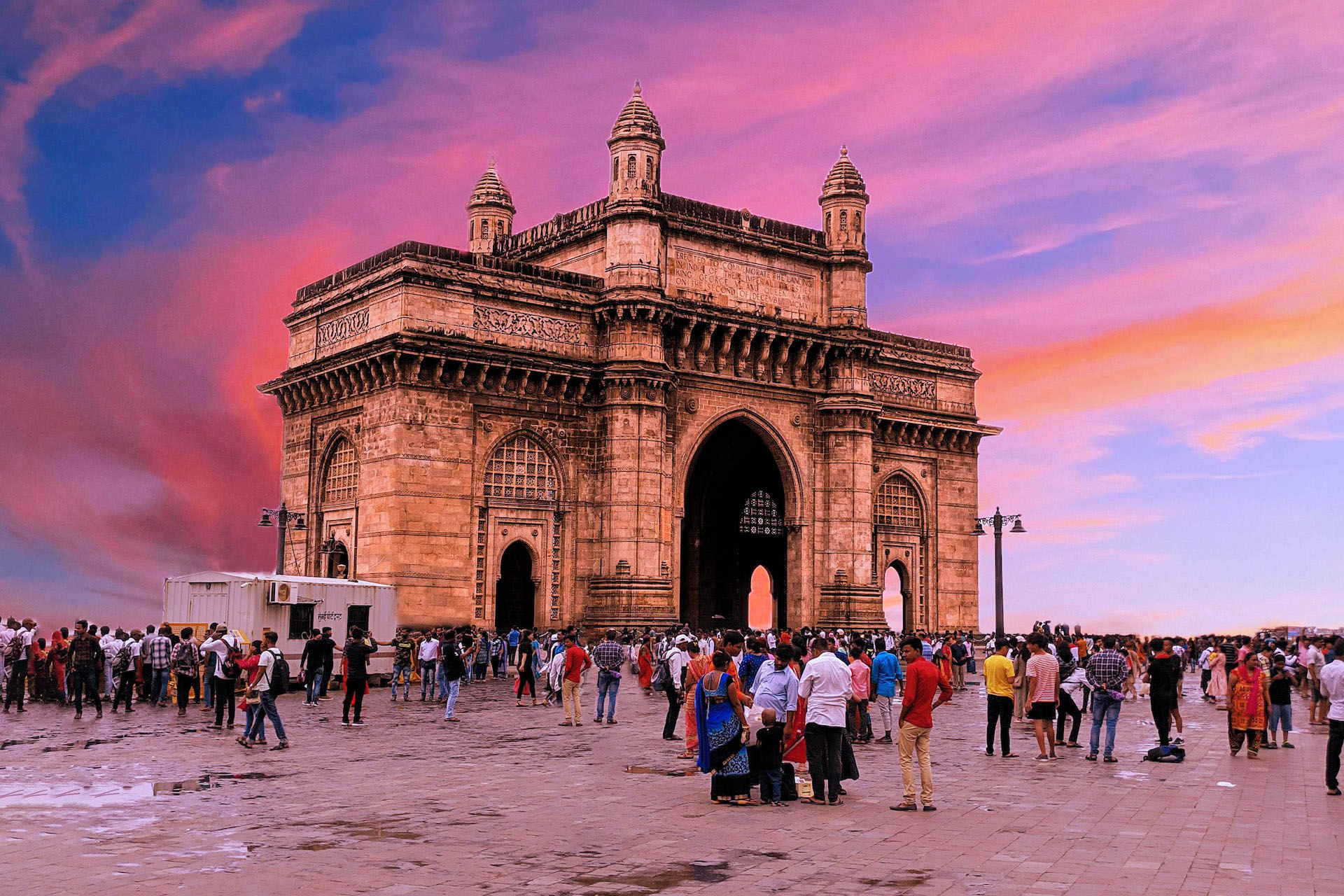 Breakfast & Dinner Breakfast at hotel, later transfer to airport, fly to Chennai (9:00-10:45AM). On arrival at Chennai airport, meet to our representative and transfer to the hotel for a two night stay. Afternoon sightseeing of Chennai, the capital city, popularly regarded as the Gateway to the South represents a culture that is distinctly different from that of northern India. The places of interest are Kalakashetra, a school of art and music that encourages exponents of Bharatnatyam, Carnatic music, traditional weaving and designing, Fort St. George built in 1653 during British reign in India, - now houses the Secretariat and Legislative Assembly of Tamil Nadu, St. Mary's Church, the oldest Anglican Church in India, Sri Parthasarathy Temple built by Pallavas in the 8th century AD, Kapaliswara Temple, Mylapore also an eighth century Pallava Temple dedicated to Lord Shiva; San Thomas Cathedral Basilica rebuilt in 1606 as a cathedral and in 1896 it was made a basilica; and Theosophical Society - the world headquarters of the Theosophical Society formed to encourage the study of comparative religion philosophy and science. 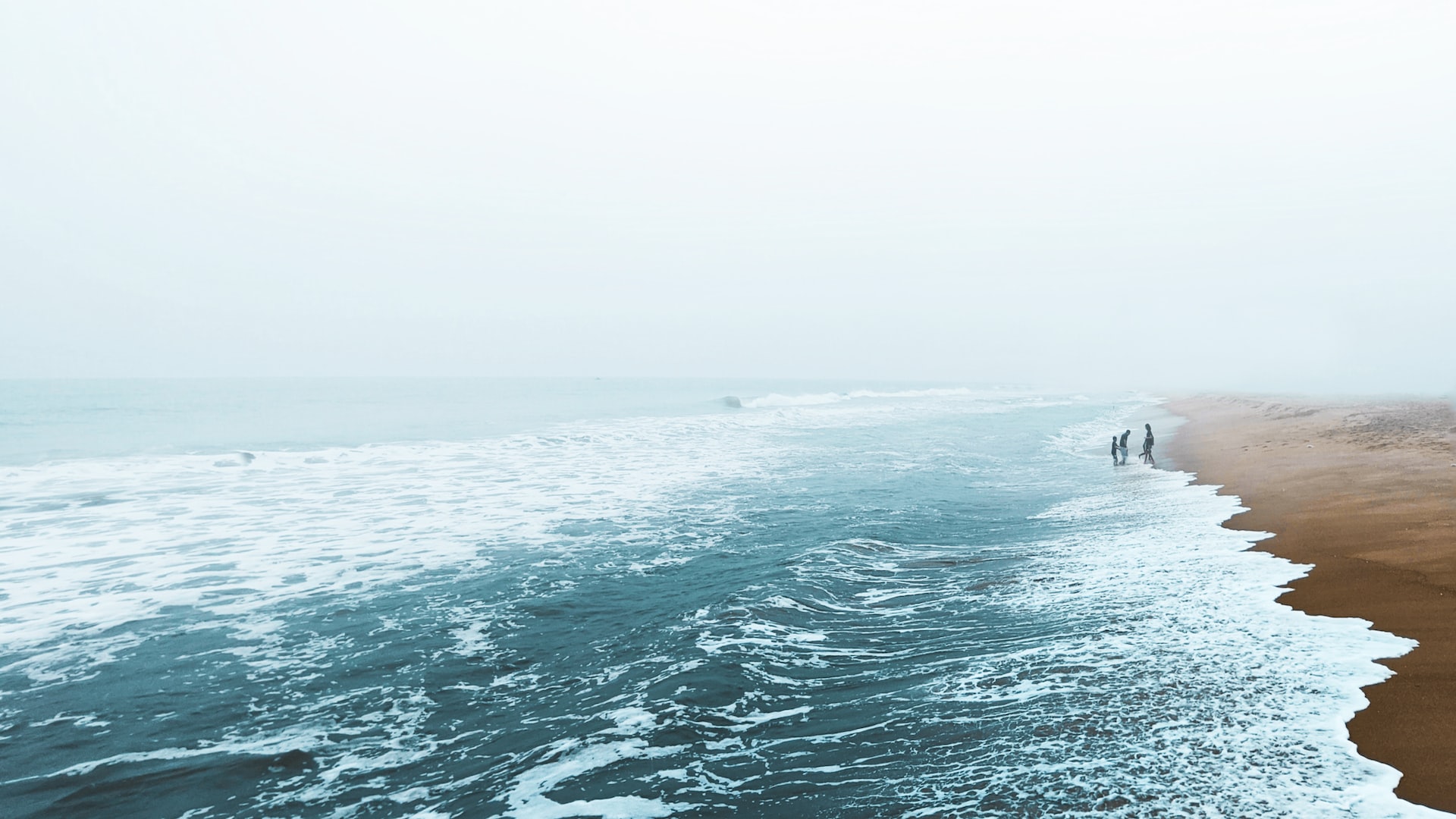 Breakfast & Dinner Morning visit to Mahabalipuram (Mamallapuram), the ancient port of Pallavas, following the drive south of Chennai on the coast. The Pallavas have created many marvelous monuments with sculptural panels, caves, monolithic Rathas and temples. Krishna Mandapam, has a big bas relief, notable for its realistic representation. The world's largest bas relief measuring 27m x 9m, whale back shaped rock contains figures of gods, demi-gods, men .beasts, birds and representation of the entire creation. Shore Temple, one of the oldest in south dating back to 8th century AD is a good example of the first phase of structural temples constructed in Dravidian style. The Five Rathas, a group of five monolithic temples, each created in different style. Afternoon/evening exclusive Dance Show of Bharatinatyam at Kala-ke-Shetra. 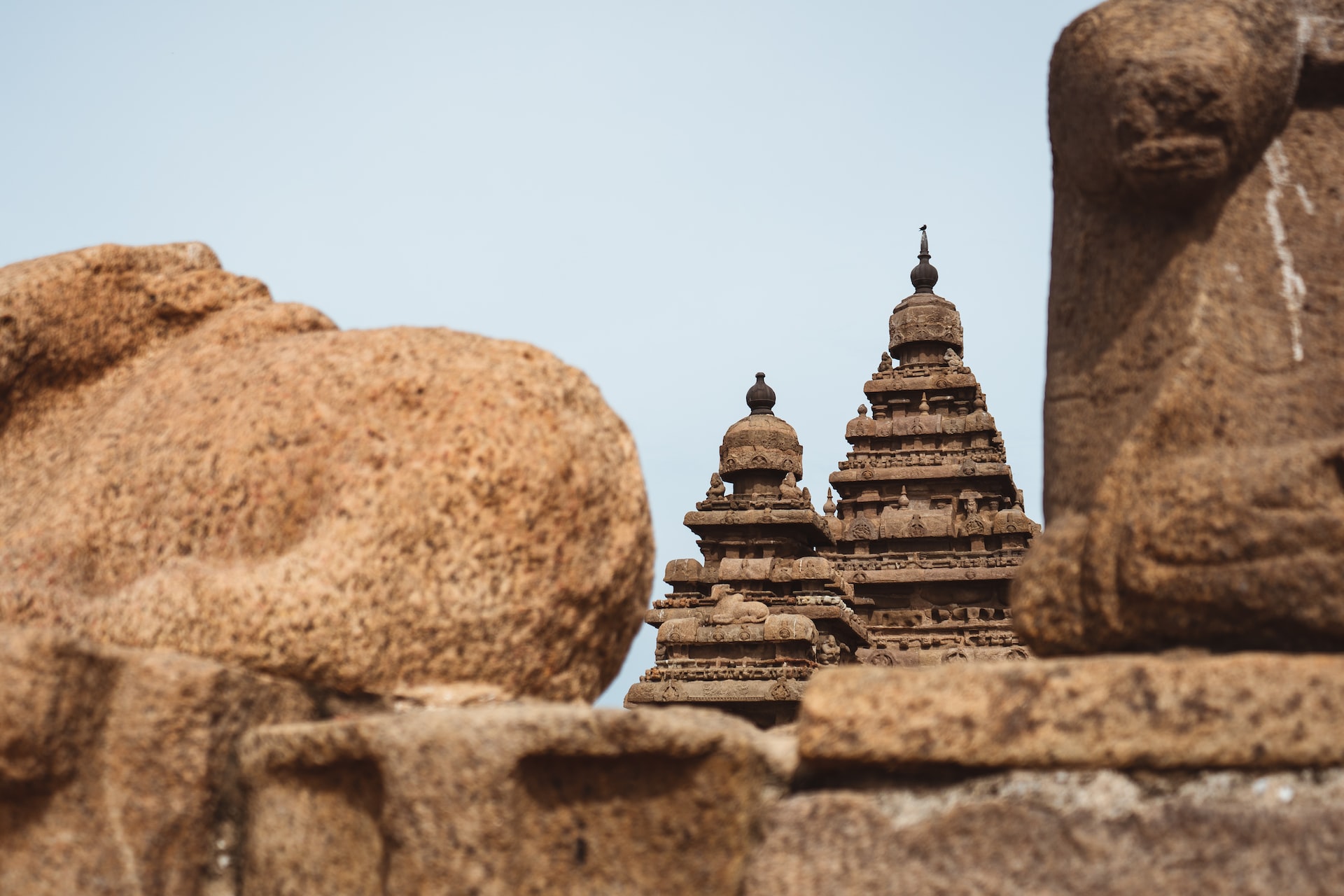 Madurai, known as Athens of the East, is the second largest city on the banks of the River Vigai. The city us believed to be more than 2500 years old. The city got its name from the drops of nectar (Mathuram) that fell from Shiva's locks when he came to bless its people for constructing a temple for him. Madurai, where the people wake up at the chant of hymns, is proud of magnificent The Meenakshi-Sundareswara Temple. Of its 12 gopurams, four of the tallest stand at the outer walls of the temple. The 48.8 m high southern gopuram is the most spectacular and has over 1500 sculptures. In the Ashta Shakti Mandapam inside the Meenakshi temple, the sculpted pillars tell the story of the beautiful princess of Madurai and her marriage to Lord Shiva. Hotel accommodation for the 2-night stay. 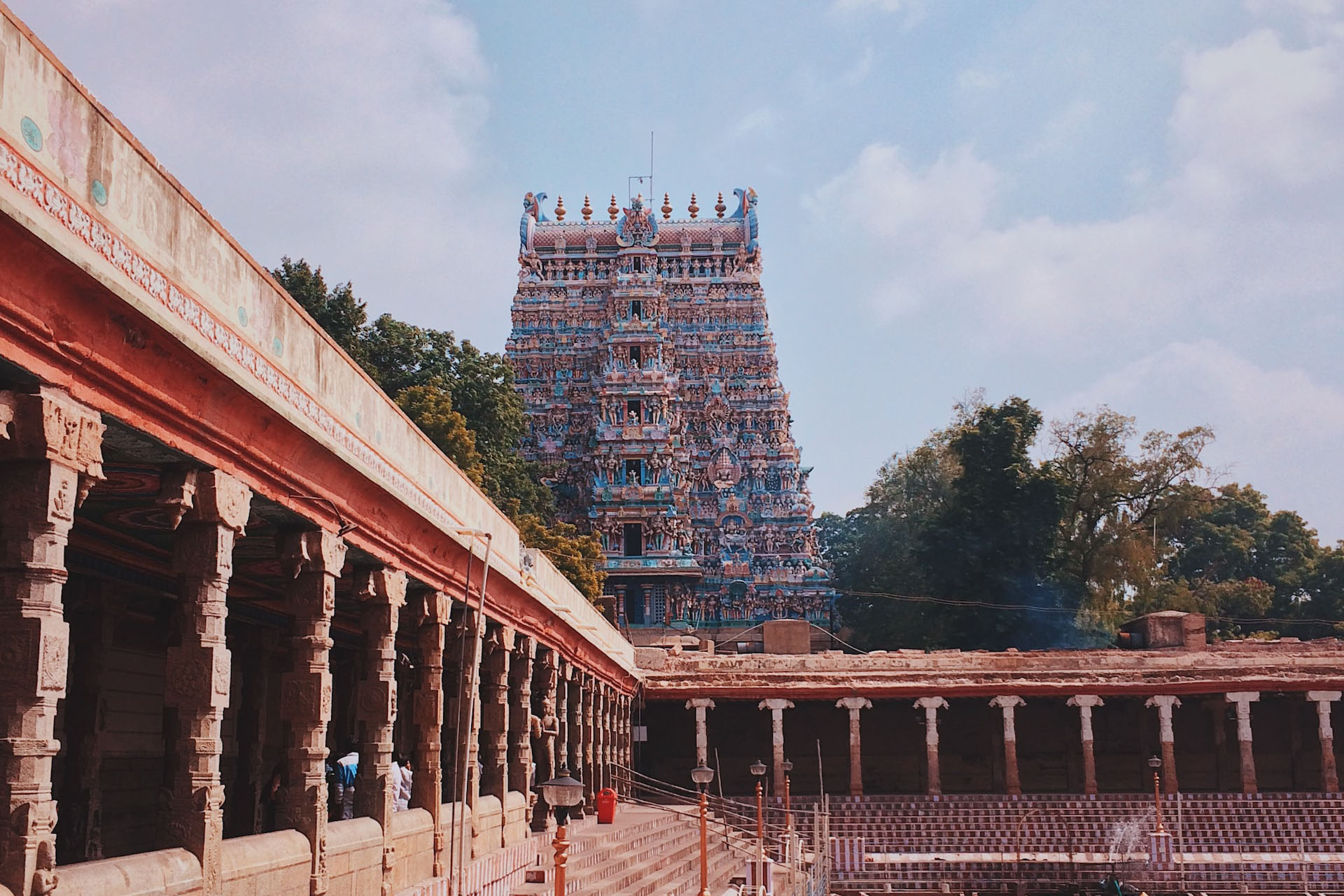 Breakfast & Dinner After breakfast drive to Kanyakumari, around 5 - 6 hour drive to Kanyakumari at the southernmost end of Tamil Nadu, the land's end of India or the point where the three seas meet at the Bay of Bengal, The Arabian Sea and the Indian Ocean. Visits include the Kumariamman temple dedicated to the virgin goddess Kanyakumari (Parvati) who stands guard over the country. The temple is built at the spot where the goddess is believed to have waited for her consort Lord Siva, Gandhi Memorial, constructed at the spot where the ashes of Mahatma Gandhi were kept for public view in an urn before a portion was immersed into the three seas, and Vivekanand Memorial built on the Vivekananda Rock where the great Philosopher guide Swami Vivekananda went into meditation that transformed him into one of the most charismatic spiritual leaders. Lodging at the hotel in Kanyakumari. 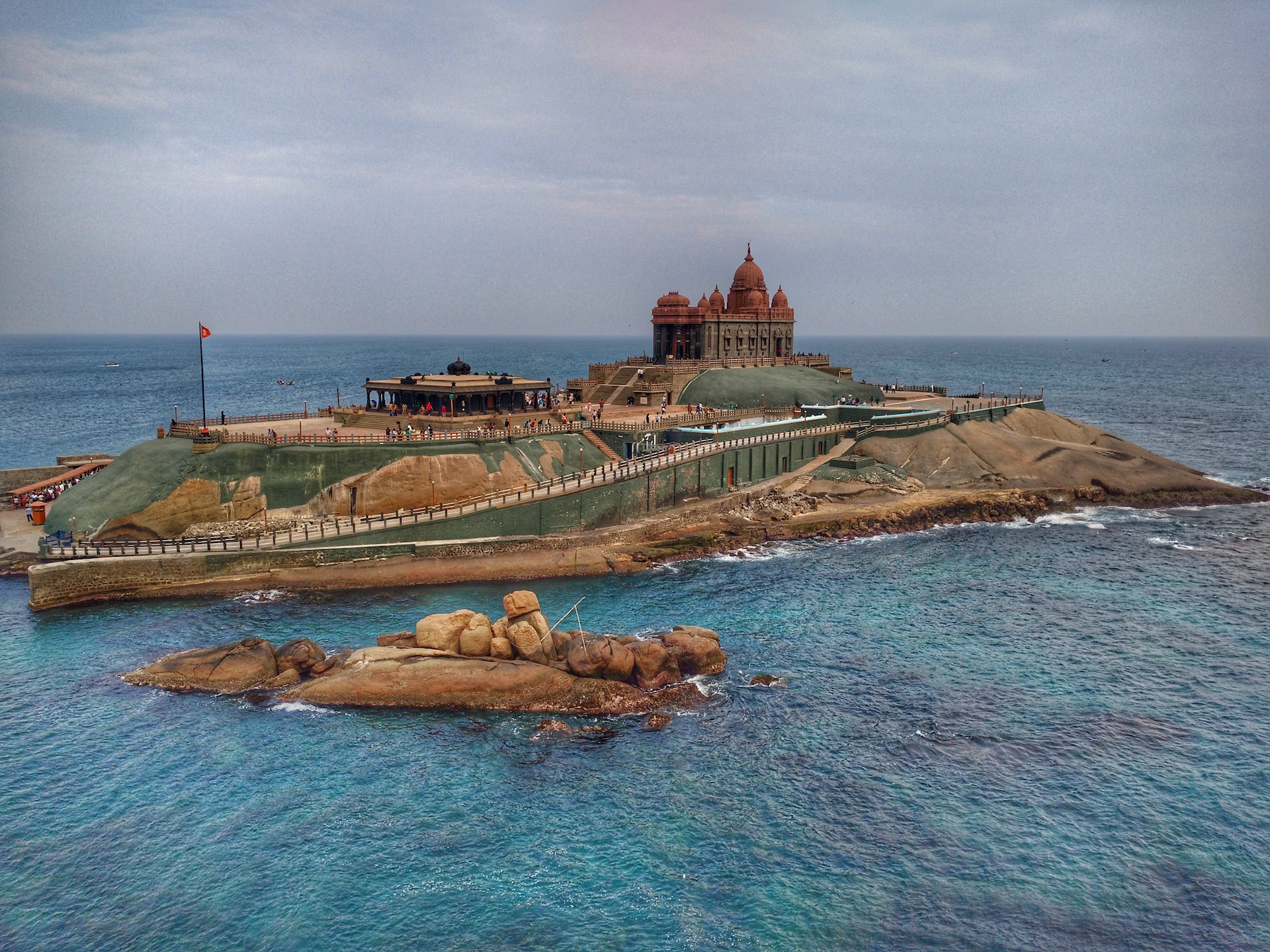 Breakfast & Dinner After breakfast commence drive to Kovalam visiting enroute Padmanabhapuram, 45 km short of Trivandrum. The capital of Travancore until 1333, Padmanabhapuram is known for its fort which encloses, among other buildings, a palace and a temple. The palace has some important art relics while the Ramaswamy temple has exquisitely carved panels depicting scenes from the Ramayana. On arrival in Kovalam, check-in at the hotel followed by a coconut welcome drink. Rest of the day free. 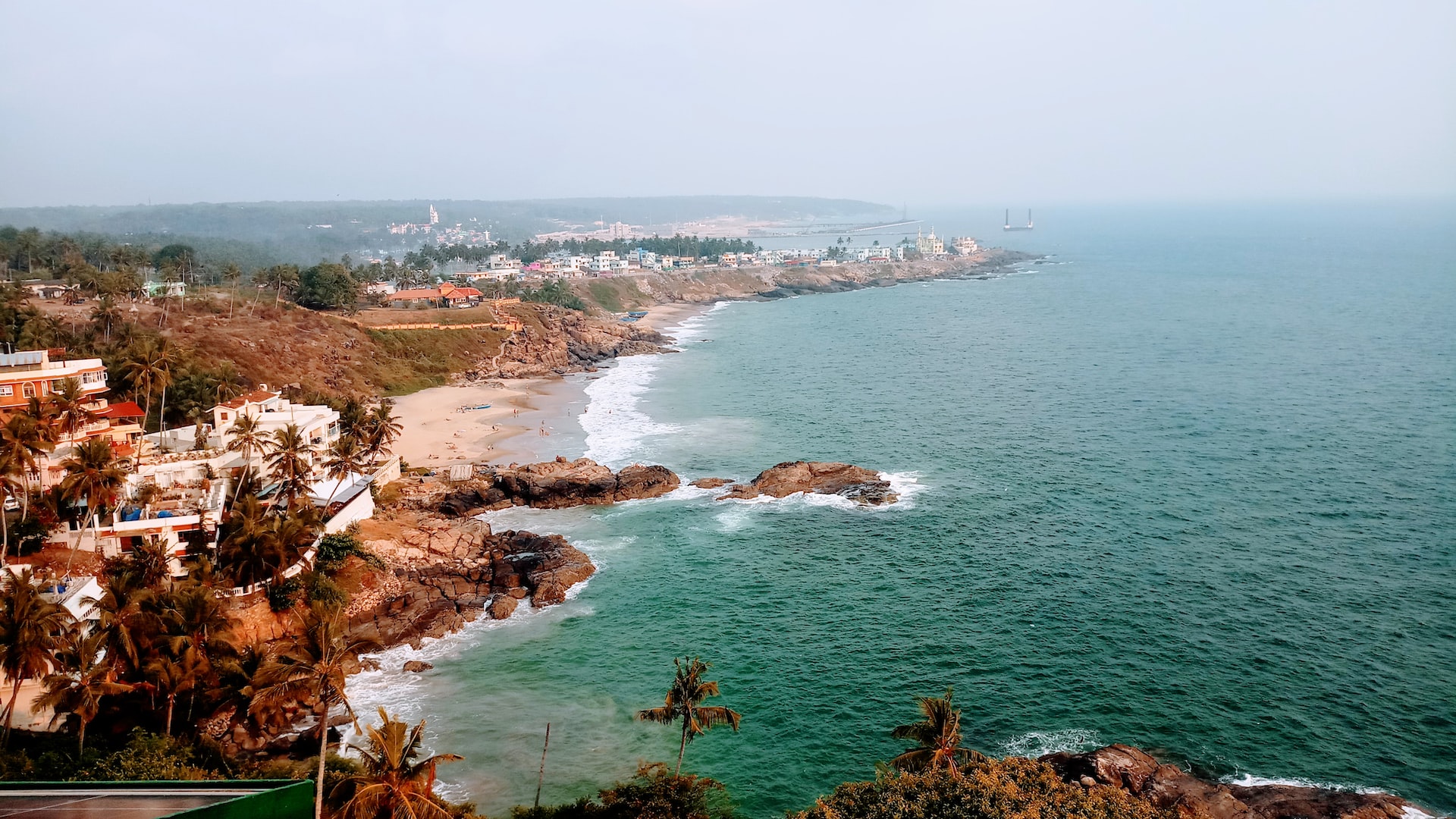 Morning sightseeing tour of Trivandrum, the capital of Kerala, built over seven forested hills, including the Padmanabhaswamy Temple, a seven storied stone structure is the most impressive landmark (his temple dedicated to Lord Vishnu contains several inscriptions and excellent murals an innumerable intricate stone carvings adorn the temple), Napier Museum of Arts and Crafts completed in 1880 (it was an early experiment in what became known as the Indo Saracenic style), It house, a priceless collection which includes 15th century wood carvings of Kerala, Gold necklaces and belts, ivory work, a carved temple chariot and wooden models of the famous temples of Kerala and 14th century Vijayanagar bronzes. Sri Chitra Art Gallery has collection of splendid paintings from the Rajput, Moghul and Tanjore school, as well as China, Tibet and Japan. The most impressive of all is beautiful treatment of Hindu mythological theme in the oil paintings of Raja Ravei Verma exhibited area. In the evening, photograph a two hour-long dance performance of Mohaniyattam by a troupe of girls in traditional Keralite costumes. 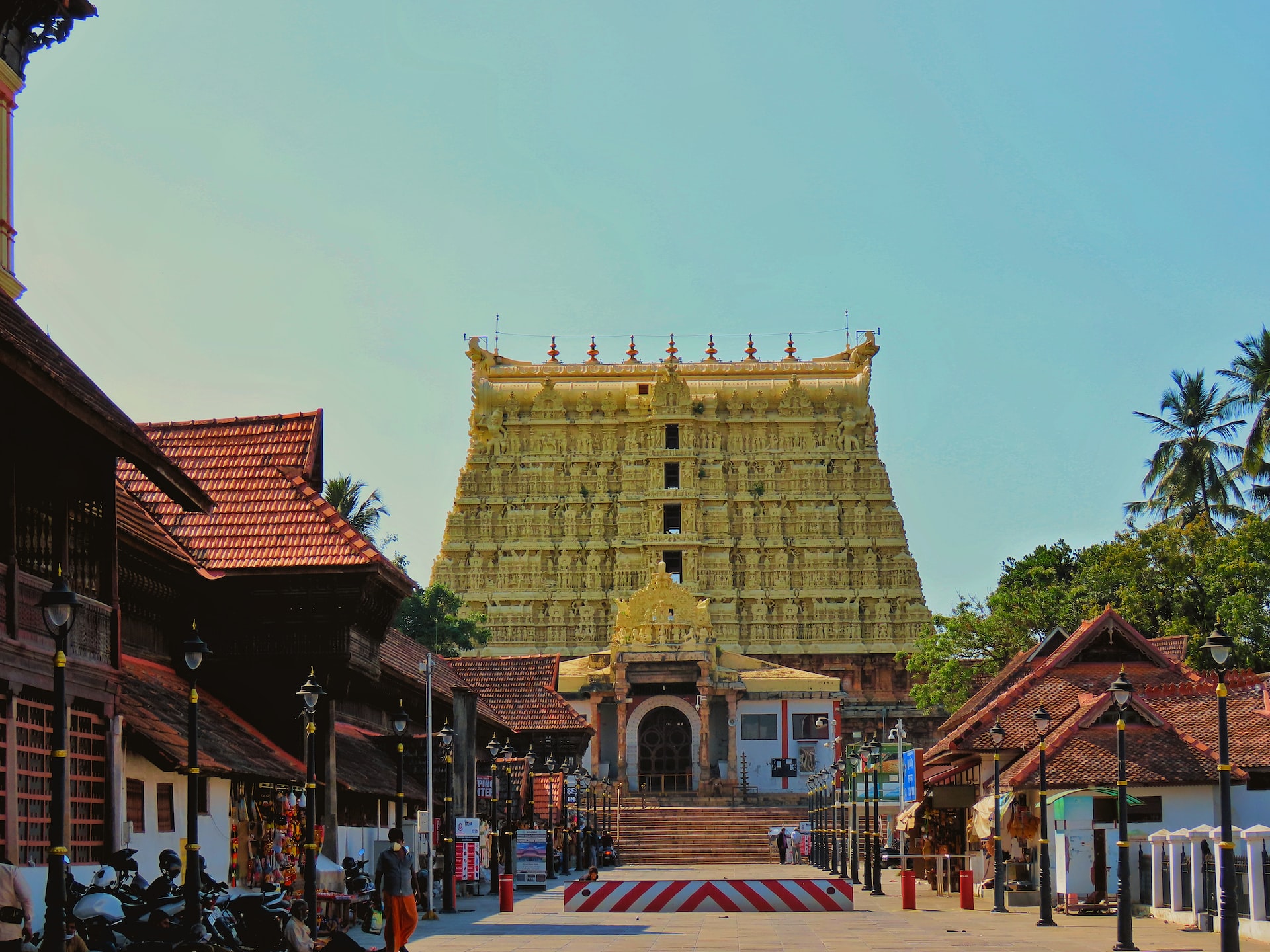 Breakfast, & Dinner After breakfast, drive to Alleppey stopping enroute at Quilon (Kollam), the town famous for cashew nut, coir products and the backwaters of Kerala. Thereafter, proceed to Alleppey stopping enroute to visit Amma Ashram, treated as God mother in south India. She has a big Ashram and many social organizations and devotees worldwide. Upon arriving in Alleppey, check-in to deluxe rooms at the Lake Palace Resort located on Vembanad Lake. 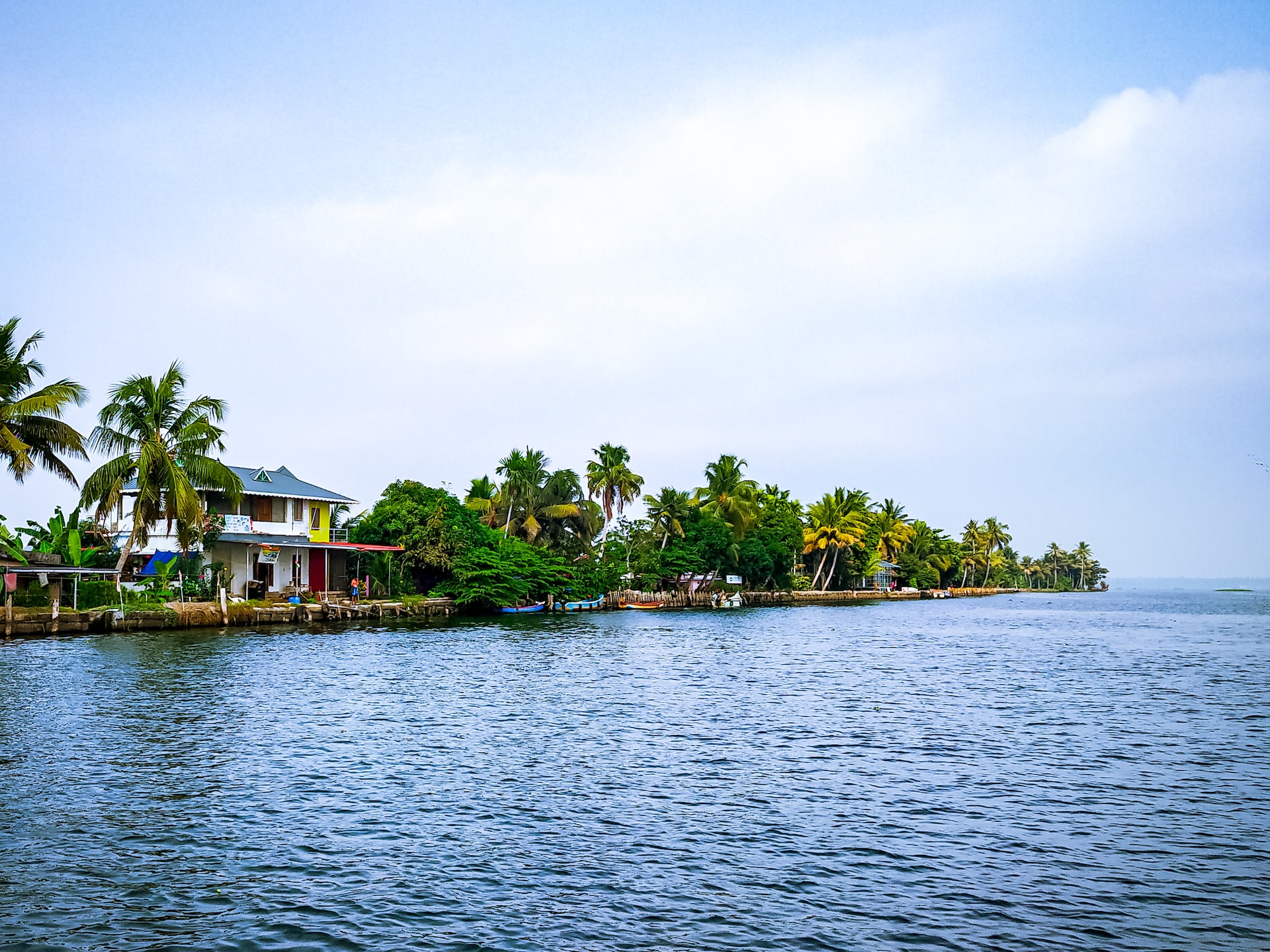 Breakfast, Lunch & Dinner Following breakfast at the hotel, transfer to the Alleppey Jetty for embarking on Kerala houseboats for a cruise of the famous backwaters. Cruise through the Punnamada lake, the venue for the famous Nehru trophy snake boat race. Then enter the enchanting waters of the Vembanad Lake to enjoy the panoramic views and the glimpses of life along the banks. Proceed for a stop by the Pathiramanal island and visit Chavara Bhavan, the old wooden house where the blessed Kuriakose Elias Chavara was born. Stay tonight aboard the luxury one and two-bedroom houseboats at Kumarakom. 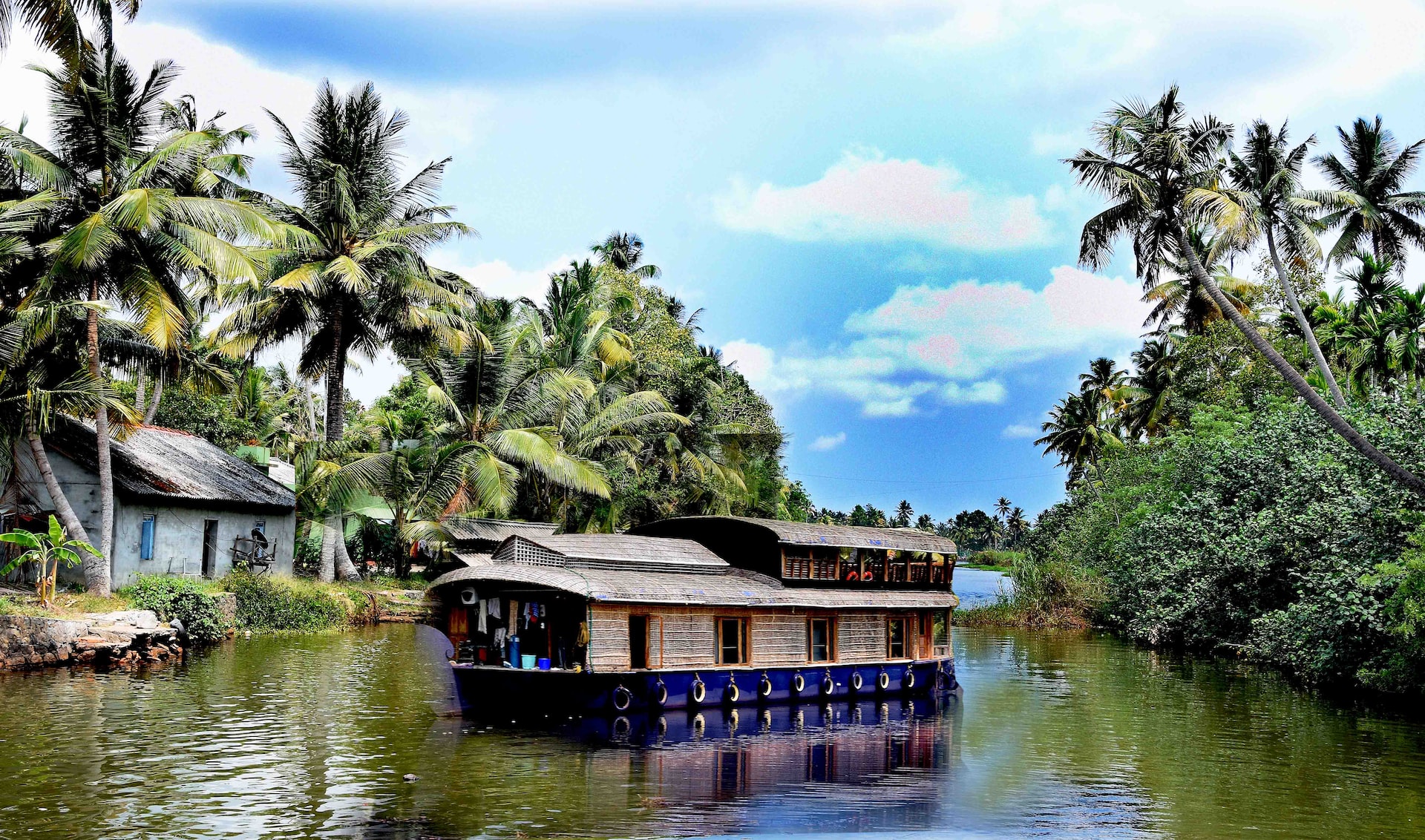 Breakfast, Lunch & Dinner After a houseboat breakfast take the short cruise to the Kumarakom Jetty to disembark at 9:30AM for the drive to Trichur. Upon arrival in Trichur check-in at the hotel or Resort. 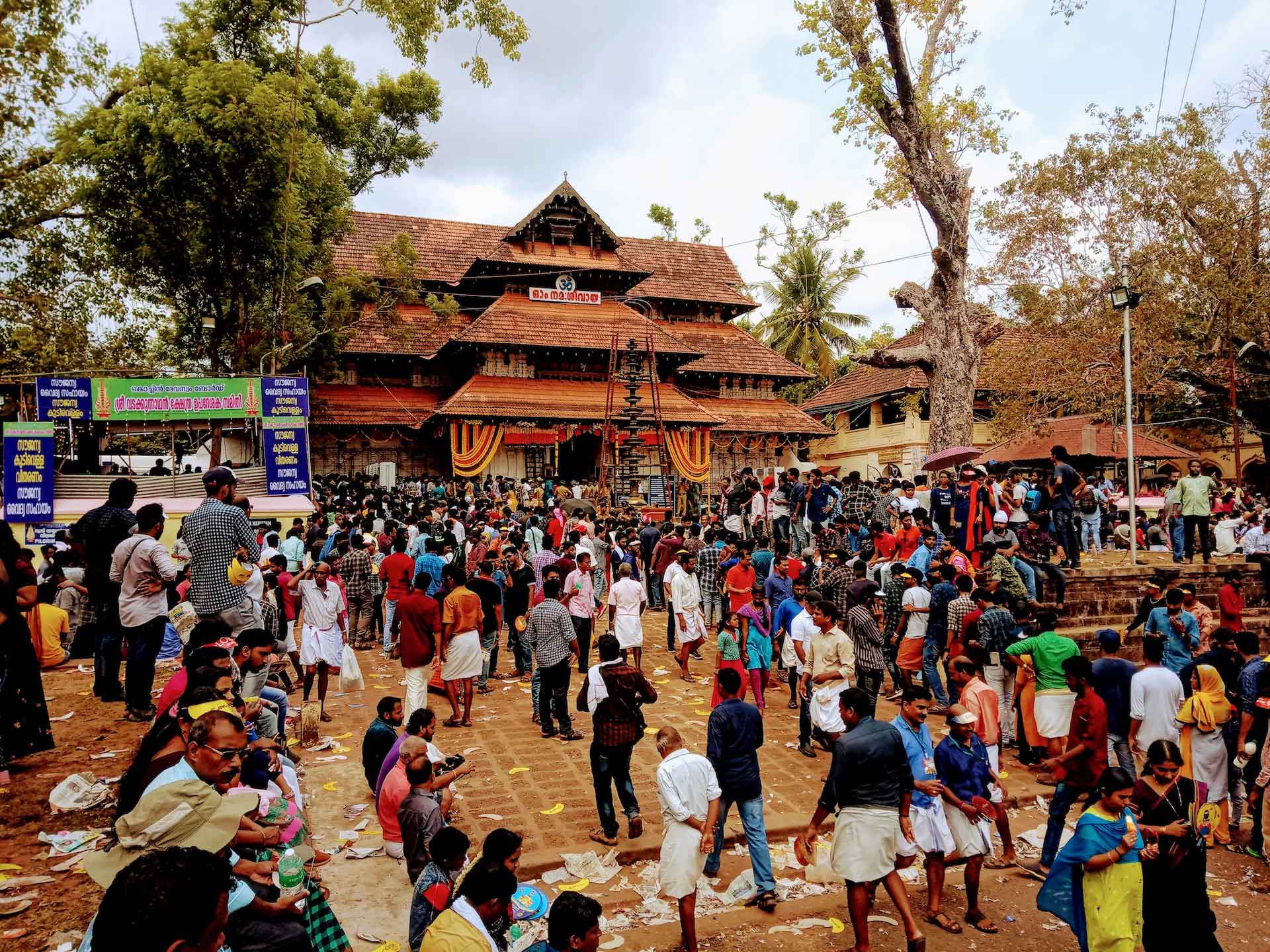 Breakfast & Dinner After breakfast, proceed to Calicut. Check-in for first of two nights at the hotel with the rest of the day free to relax or explore. In the evening there will be a photo op during a 30 minute performance of Kallaripayattu, the mother of martial art, at the hotel. 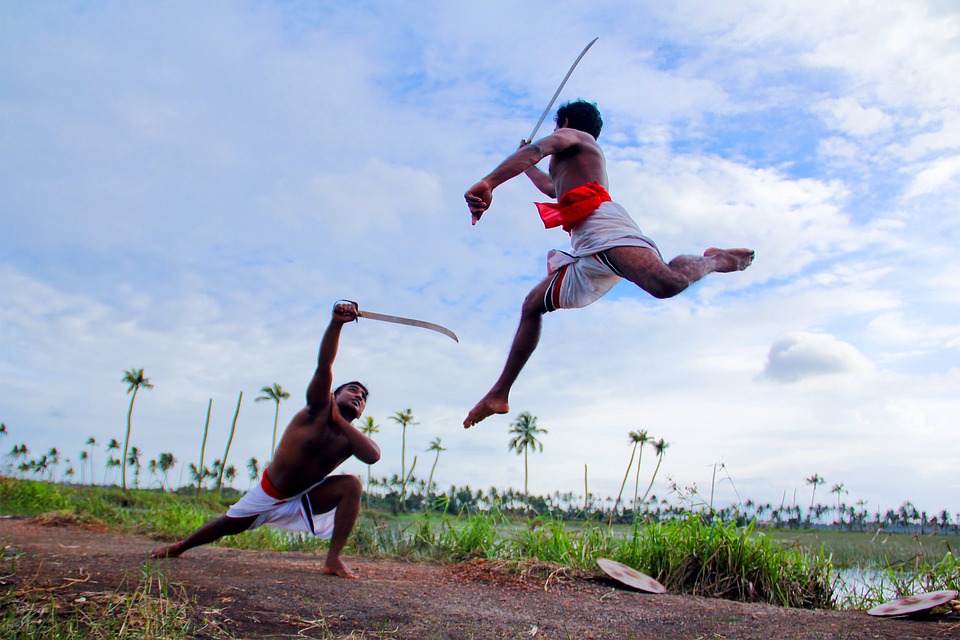 Kallaripayattu, the mother of martial art

Breakfast & Dinner Morning visit to Kappad, 30 km from the resort. This is the historic beach where Vasco-da-Gama set foot, on 27 May 1498 A.D., with 170 men in three vessels. A monument on the beach commemorates this historic event. The rock-studded beach is locally known as Kappakadavu. An interesting feature of the landscape is the sprawling rock that protrudes into the sea. The temple on the rock is believed to be 800 years old. Return to the resort for dinner and an evening 30 minute performance of Theyyam, the ancient form of Kathakali, practiced by special families on occasions of festivals only. 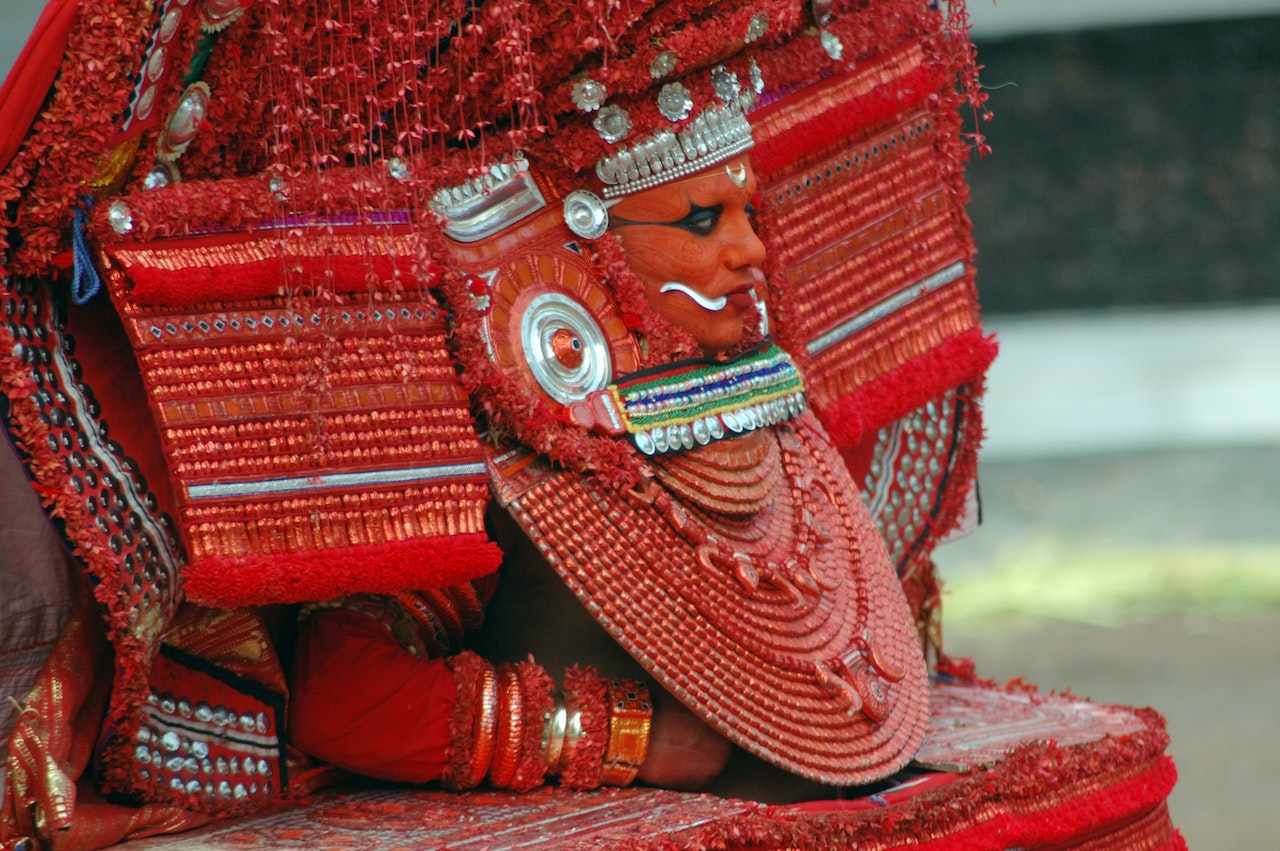 Breakfast & Dinner to Cochin (Kochi). Upon arrival, check-in at the Taj Malabar Hotel on Willingdon (Wellington) Island overlooking Cochin Harbor for the first of two nights in a sea view room in the Tower wing of the hotel. Rest of the day free to explore around the harbor and seafront and to photograph the famous Chinese fishing nets at sunset. 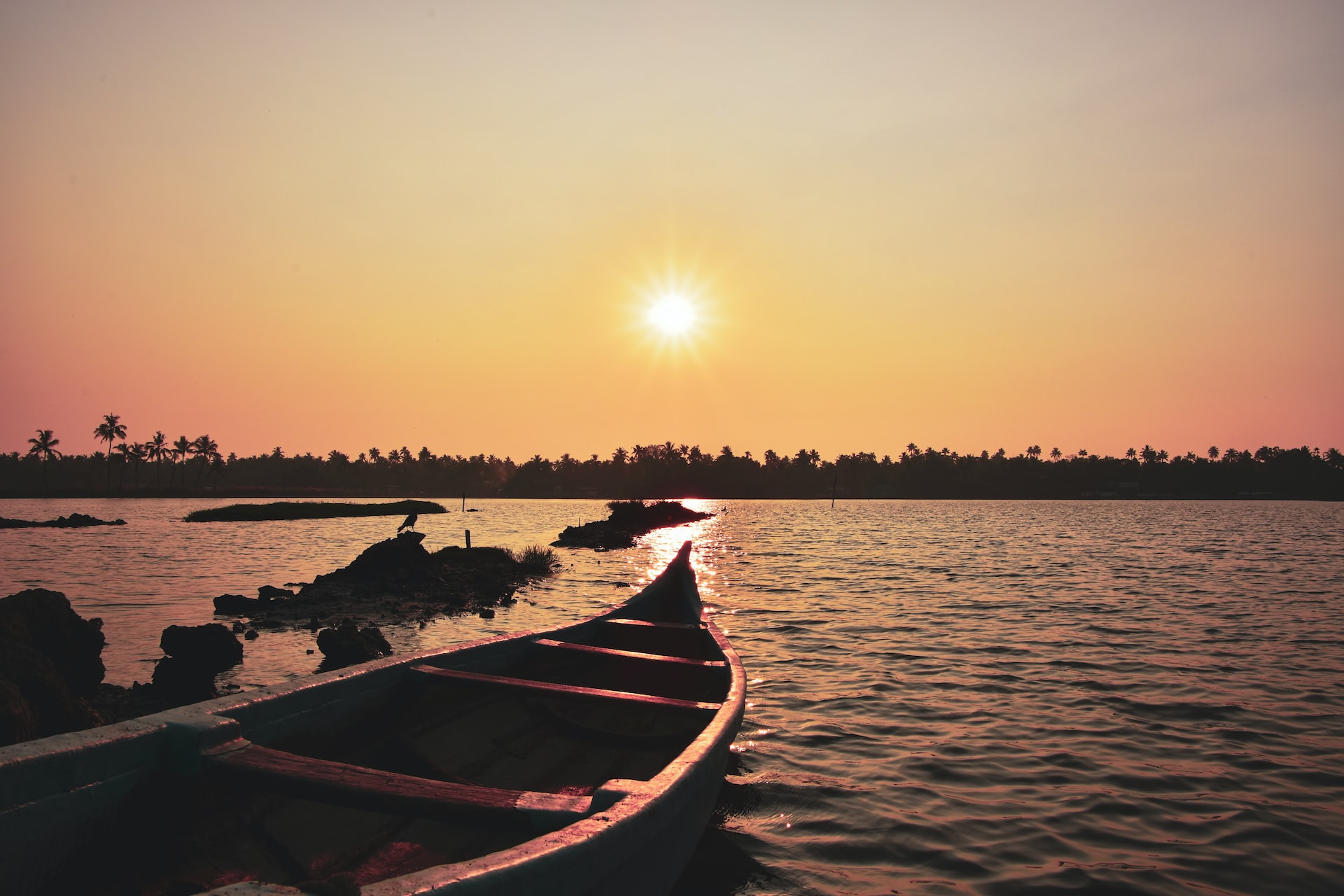 Breakfast & Dinner Morning sightseeing tour of Cochin, Kerala's historic commercial center, located on a fine natural harbor. Cochin (Kochi) is the gateway for Kerala and is famous for Mattanchery Palace, St. Francis Church, Bolghatty Island, a Jewish synagogue and cemetery, and the photogenic Spice Market, one of the biggest in India. 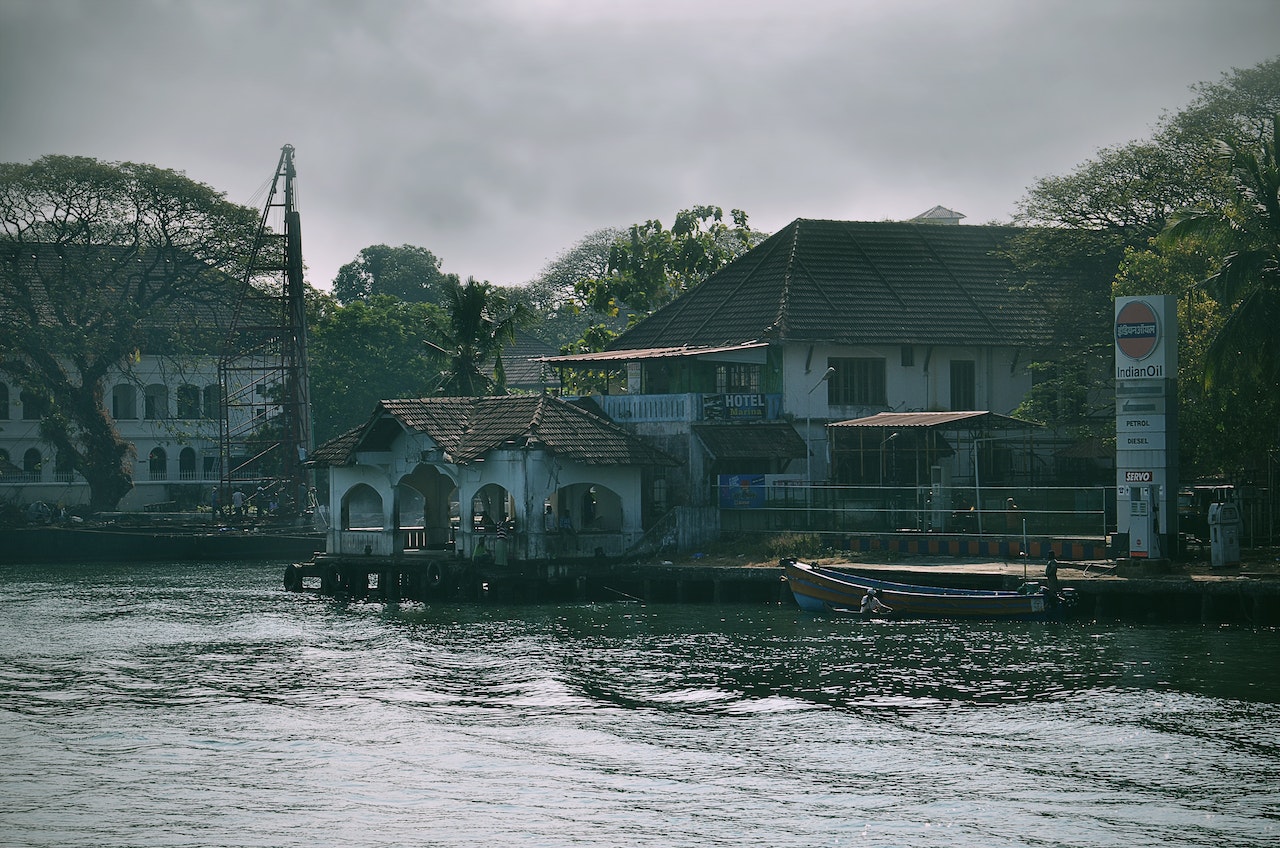 Breakfast & Dinner After breakfast transfer in the morning to the airport for flight to Goa. On arrival, transfer to accommodations for next two nights. Rest of the day free to enjoy the beach, explore the nearby village, or lose money in the casino. 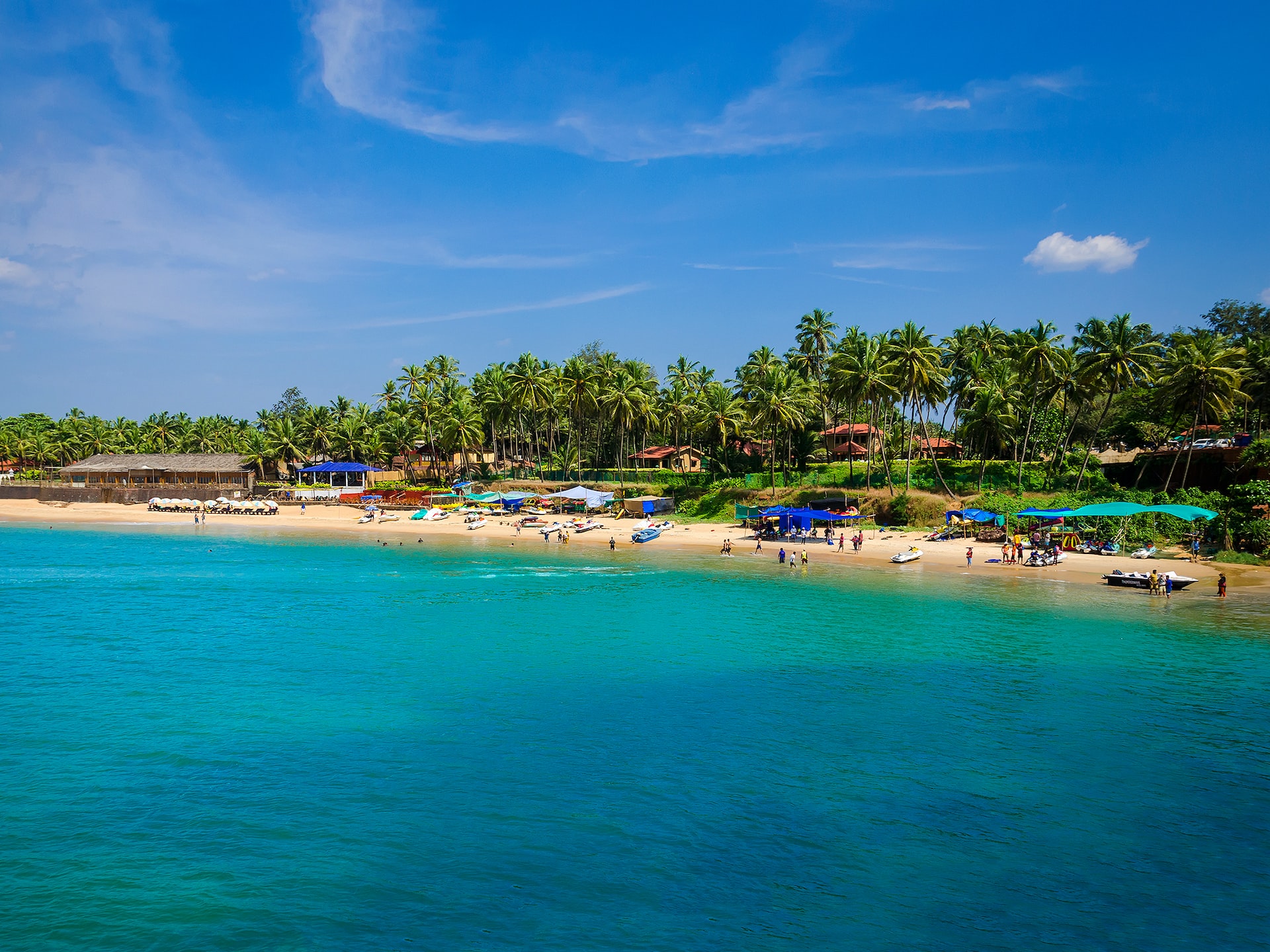 Breakfast & Dinner Full day sightseeing beginning with Panaji, the capital of Goa, a charming city on the left banks of silvery Mandovi River with beautiful red roofed houses. Next is a visit to Old Goa, 10 km east of Panaji, founded in the first decade of 16th century. Photo ops there include the Basilica of Bom Jesus, built in the 16th century, the most popular and famous of all churches in Goa. The mortal remains of St, Francis Xavier, kept in a silver casket, are enshrined here. This church, dedicated to infant Jesus, is now a World Heritage Monument. 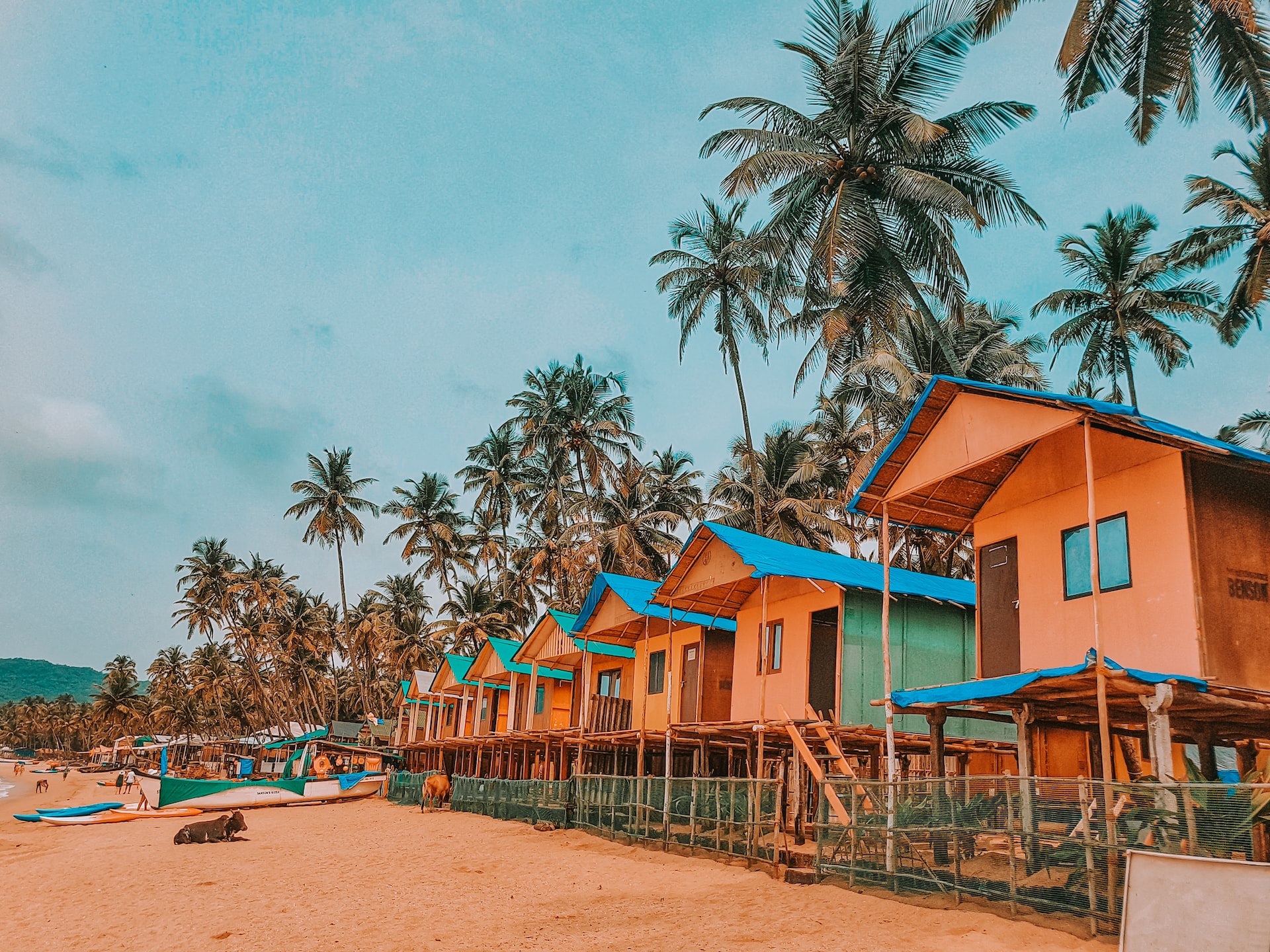 Transfer in the afternoon for the flight to Mumbai connecting at Mumbai's international airport for evening flights home. 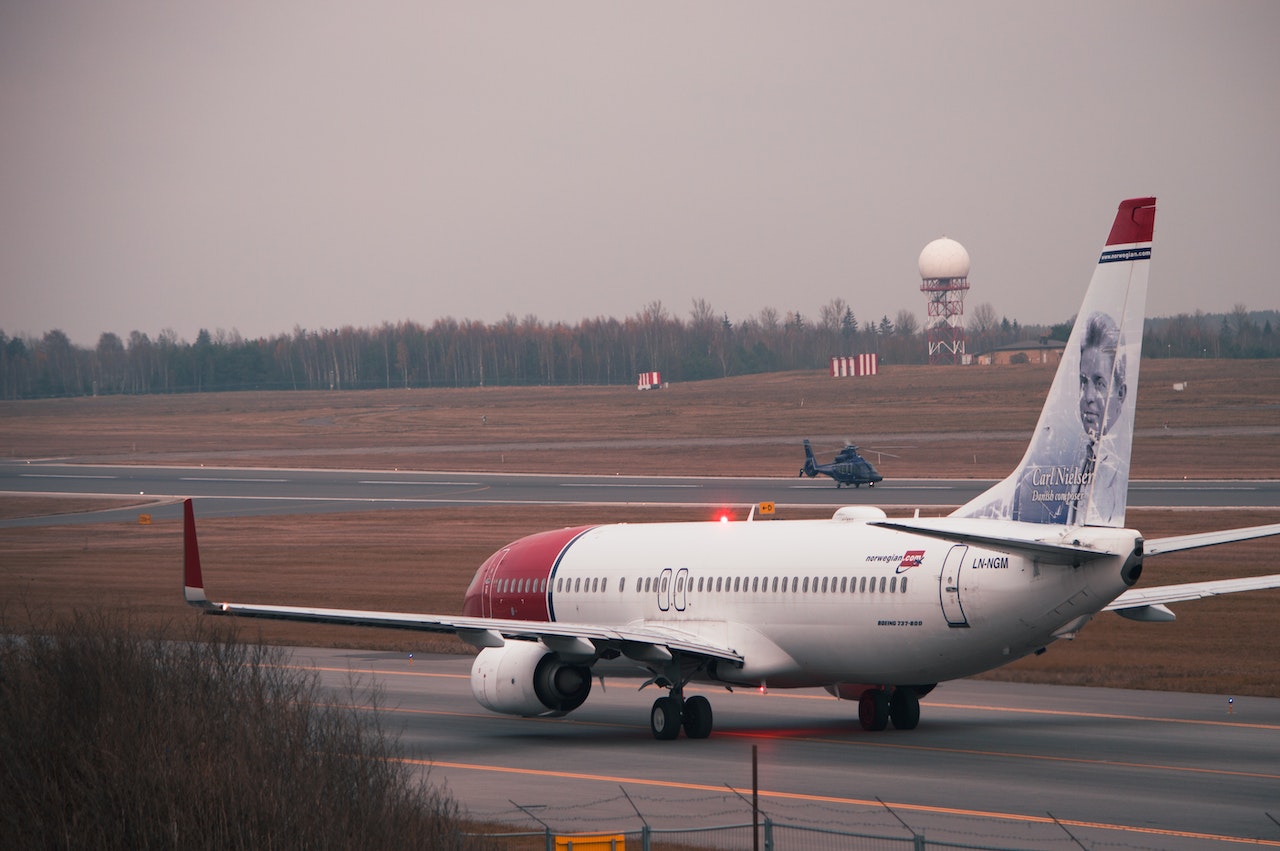 Planning to visit South India?Contact us!